Diane B. from East Chatham, NY 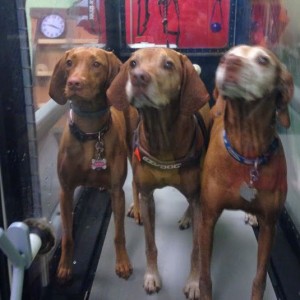 “Banner”, a nine year old champion male vizsla, is an accomplished canine athlete, a Master Hunter and my constant companion. Thanks to the extraordinary people of Upstate Veterinary Specialties he will continue to be my companion for many years to come.

In January 2013, I heard a cracking sound in his back and “Banner” began to whimper in pain. My veterinarian immediately sent us to Dr. Todd Bishop at UVS. “Banner” was given a potentially life-threatening but certainly life-altering diagnosis — a degenerative intervertebral disc disease. Rather than operate immediately with no guarantee of a good result — a pain-free, normal, active life — Dr. Bishop suggested that we try physical therapy and medication first.

Dr. Laura Perez worked with “Banner” for almost a year with a variety of active exercises and alternative therapies which gave him months of mobility and minimal pain. Unfortunately, his disease progressed to include compression of the spinal cord so that by January 2014 it was clear that surgery was our only viable option.

In February 2014, Dr. Bishop performed a dorsal laminectomy…a surgery which lasted 7 1/2 hours. “Banner” tolerated the surgery well but for the next two weeks he exhibited little movement, sensation or awareness of his hind quarters. The doctors and staff never gave up on him and a week later without any indication that he could, “Banner” stood up. He came home after four weeks in the hospital able to bear weight on his hind quarters but unable to walk without the support of a sling. To my great astonishment several days later he opened the door of his pen and walked about 25 steps into my kitchen. As I write this, just two months after the initial surgery, “Banner’s” progress has been nothing short of amazing. He is walking, wanting to run but not yet allowed to, stretching, scratching his ears with his hind legs and sitting with ease none of which he was able to do just two weeks ago.

I will be forever grateful to the doctors, physical therapists and veterinary technicians for their surgical skill, technical expertise and dedication to their patients. They exhibited a standard of care unmatched in my experience both in upstate New York and in New York City where I lived for many years. This standard of care was exemplified by their treatment of “Banner” as an individual rather than as simply another surgical case. Dr. Bishop took him outside while he was still catheterized just to give him fresh air and, on those evenings he was working late, turned out the 24/7 lights over his pen to give him some darkness for sleeping. The veterinary techs included him in staff lunches and brought in special treats to entice him to eat and the administrative staff never failed to greet him by name or with a head scratch making our frequent visits and long stay at UVS less fearful for “Banner” – all small acts of kindness but so meaningful.

The doctors and staff made it possible for me to spend hours at the hospital sitting with “Banner” in his pen, answered all my questions with patience and understanding and, with their unfailingly positive attitude, helped me sustain my own optimism.

Upstate Veterinary Specialties is truly a place where miracles happen…..I know because I live with one of those miracles.

Clients arriving for their appointment with a specialist or an emergency visit will be directed to call our Client Relations team upon arrival. During your initial phone call with our team, clients will be given three options for proceeding with their appointment.

For an appointment or visit within the hospital, either in the lobby or straight to an exam room, we are encouraging one (1)  individual per patient. Other owners will have the option to join the conversation over the phone or video call. We are maxing the number of individuals to two (2) visitors per patient.

Mask Policy: Face masks are required in all public areas of the hospital.

Thank you for your cooperation and understanding in this matter.