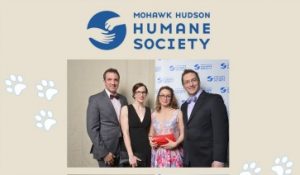 April was a big month for Upstate Veterinary Specialties (UVS) to reach out to the greater Capital District community in support of animal welfare. UVS Doctors and Staff had two opportunities to trade in their normal scrubs or business casual attire for more formal dress when they attended Gala events for the Mohawk Hudson Humane Society and the Animal Protective Foundation.

“Around the World for 80 Strays”

Upstate  Veterinary Specialties Drs. Chelsie Estey and Agnieszka Kent are both relatively new to the Albany area, although both have contributed their veterinary expertise for years. These UVS doctors and 500 others also attended the Mohawk Hudson Humane Society (MHHS) annual Gala on Saturday, April 9th.

This year’s event broke the record for both attendance and donations.  A highlight of this annual event is the Humane Hero Awards, which allows MHHS to recognize groups or individuals in the Capital District who have partnered with MHHS to enrich the lives of animals and the people who love them.

The gala was also an opportunity to highlight the Safe Haven Program, which provides housing for the pets of survivors of domestic violence. 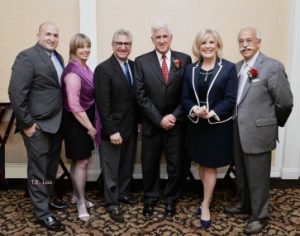 The festivities were emceed by Liz Bishop of CBS 6 and included an extraordinary silent auction and dynamic live auction event led by celebrity auctioneer LeGrande Serras.

The foundation was proud to honor Steve Caporizzo – NEWS 10 Meteorologist and host of “Pet Connection”, with APF’s 2016 Animal Advocacy Award.

Colleen Keating, Director of Development with APF says of the event: “With the help of our amazing sponsors, guests, and donors, we were able to raise more than $103,000!  This year’s gala will provide funding for companion animal shelter and community spay and neuter clinic so that we may give medical attention, housing, food, and behavioral training to the thousands of cats and dogs who come through our doors.”

UVS has always supported animal welfare in its delivery of specialty medicine, however the opening of UVS’s 24/7 Emergency facility has brought a focus on a broader population of animals, which also includes strays and rescued animals.