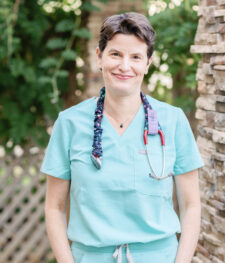 “Some people talk to animals. Not many listen though. That’s the problem.” – A.A. Milne

Dr. Ellen Scott was born and raised in Syracuse, New York, and obtained her DVM from Cornell University in 2000. Seeking escape from the gloomy lake-effect winters for which Central New York is famous, she followed the lure of warmer weather and left New York for a job in Alexandria, Virginia.

Family ties drew her back to New York, and she settled in the Albany area in 2001, working at several local veterinary practices. As a busy general practitioner, she developed a particular interest in emergency and critical care and was thrilled at the prospect of honing her skills at Upstate Veterinary Specialties. Dr. Scott has been with Upstate Veterinary Specialties since 2014 and is currently the Emergency DVM Manager.

Ellen lives with her husband, their two children, the loves of their lives, and two cats. As her husband describes it, she enjoys taking in “late-model fixer-uppers” and restoring them to their natural shine and exuberant good health.