Home » Pet Tales » “Viking” is on the road to recovery!

“Viking” is on the road to recovery!

“Viking’s” grand name does not disappoint: the 165-pound bull mastiff recently underwent Tibial Plateau Leveling Osteotomy (TPLO) surgery performed by UVS surgeon Dr. M. Faulkner Besancon. Earlier this year, “Viking” slipped on ice outside his home which resulted in him favoring his right hind leg and having occasional difficulty with stairs or climbing onto the “man cave” couch.

Following the slip, “Viking” visited his family veterinarian who then referred the family to consult with Dr. Besancon.  After examining “Viking” in May and diagnosing the same type of ligament damage in both hind legs, Dr. Besancon performed the TPLO surgery, which stabilized the pet’s right “knee”.

With a supervised return to increasing activity, “Viking’s” recovery is going well. Once his right hind leg is healed, he will likely return to UVS for the same type of surgery on his left “knee”. 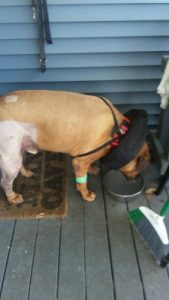 One day after surgery 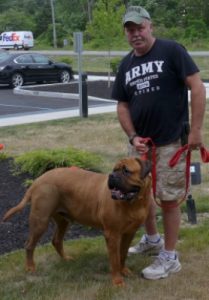 Clients arriving for their appointment with a specialist or an emergency visit will be directed to call our Client Relations team upon arrival. During your initial phone call with our team, clients will be given three options for proceeding with their appointment.

For an appointment or visit within the hospital, either in the lobby or straight to an exam room, we are encouraging one (1)  individual per patient. Other owners will have the option to join the conversation over the phone or video call. We are maxing the number of individuals to two (2) visitors per patient.

Mask Policy: Face masks are required in all public areas of the hospital.

Thank you for your cooperation and understanding in this matter.