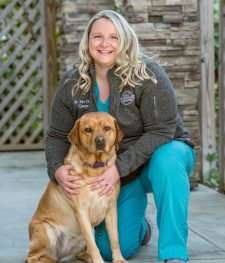 “The dog lives for the day, the hour, even the moment.” – Robert Falcon Scott

Dr. Kimberly Cleveland was born and raised in Endicott, NY, just outside Binghamton. In 2012, she attended Binghamton University for her undergraduate degree in Integrative Neuroscience and Mathematics. In 2014, Dr. Cleveland completed a small animal externship through the Veterinary Orthopedic Sports Medicine Group in Annapolis Junction, MD, where she rotated through surgery, neurology, and administration. In 2016, Dr. Cleveland received her Clinical Small Animal Dentistry Certification and, in 2017, received her Doctor of Veterinary Medicine from St. George’s School of Veterinary Medicine, with her fourth year completed at Cornell.

Kimberly’s love for animals started early on in her career where she worked as a receptionist at the Broome County Humane Society. From there, she pursued her veterinary career while working as an assistant for Owego Veterinary Hospital in Owego, NY. When Dr. Cleveland received her DVM in 2017, she returned to Owego Veterinary Hospital as an Associate Veterinarian. Before joining Upstate Veterinary Specialties in 2020, Dr. Cleveland worked as an Associate Veterinarian at Dickin Memorial Animal Hospital in Endicott, NY – a small animal private practice with 24/7 on-call emergency services.

During her career, Kimberly has lived in Grenada, West Indies, and Ithaca, NY, and is excited for her new journey in upstate New York and all its changing seasons, especially fall. She enjoys running, hiking in the Adirondacks, and paddleboarding during her spare time. Kimberly and her husband have two dogs – a shepherd mix named Kado (brought home from Grenada) and a yellow lab named Kali. They also have a cat named Angus.